If you can't find it, build it: How one Main Line couple spent 10 years designing their dream home by Paul Jablow, For The Inquirer

When Jasmin Fung describes how she and her then-fiance, Steve Lyons, looked at more than 100 houses before picking their starter home, it becomes a little easier to understand what came next.

“There just weren’t a lot of [available] contemporary houses on the Main Line,” she said, reflecting on the year-long search.

And of the few potentially realistic choices, nothing clicked for them. Those that did were unaffordable for the young couple who had met while attending business school at University of Chicago.

Their solution: Buy something large on a plot they really liked and do the renovations gradually. Very gradually. A "before" photo of the exterior of the Gladwyne home belonging to Jasmin Fung and Steve Lyons. Courtesy of Jasmin Fung 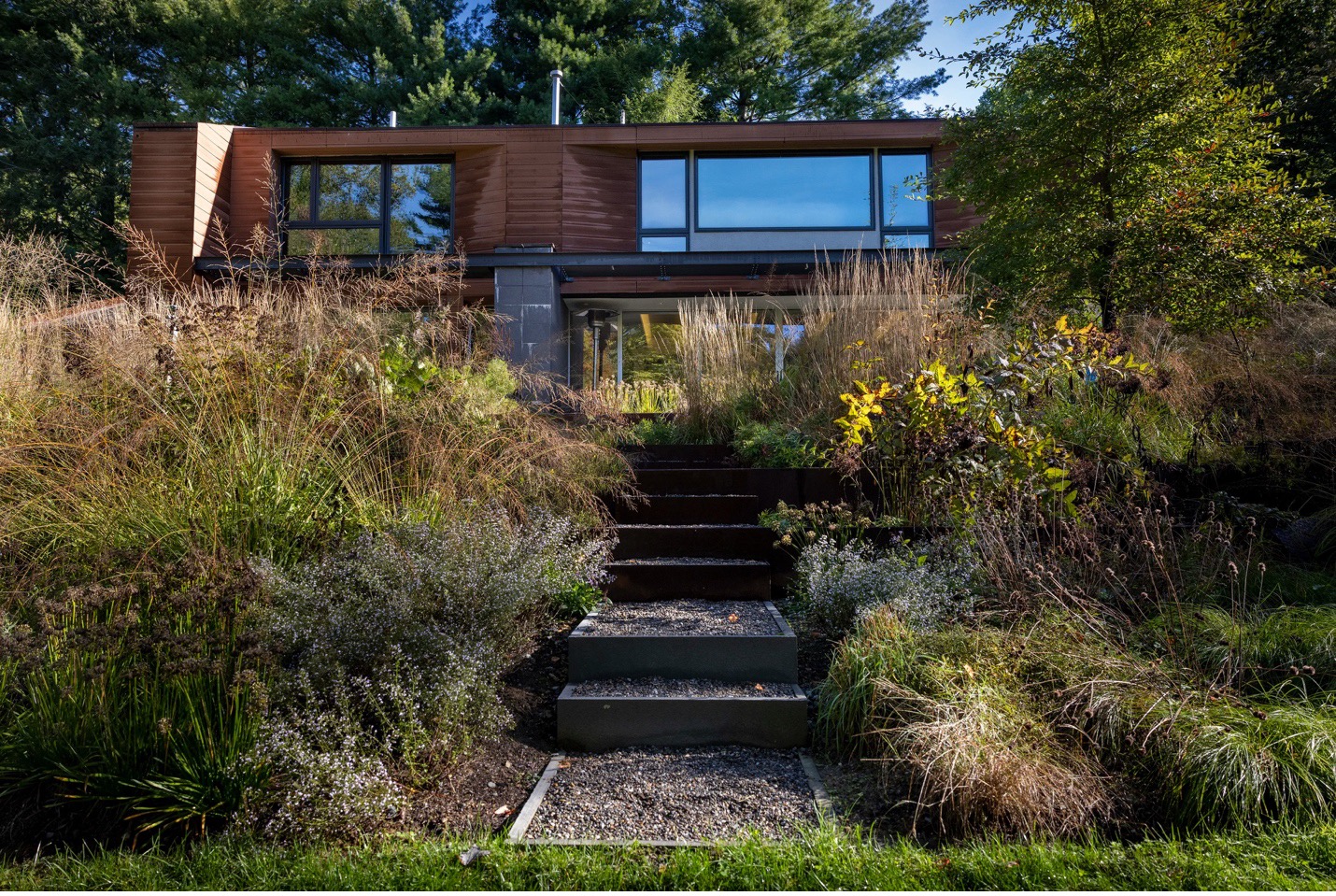 Exterior of the home of Jasmin Fung and Steve Lyons in Gladwyne after a decade of renovations. Alejandro A. Alvarez / Staff Photographer

They bought a two-acre property, built in 1952, on Waverly Road in Gladwyne. “This would be it until retirement,” she said.

What followed was a six-phase, 10-year project that ended just recently. A decade after beginning this journey, Fung is now a stay-at-home mom of an 8-year-old and a 10-year-old, and Lyons is established in a career in finance.

Start with the choice of an architect. As out-of-towners, the couple had few connections to recommend one.

So they did a cold Internet search and came up with Adam Montalbano.

“We liked the idea of hiring a young architect,” Fung said. “And Adam’s projects looked edgy.”

Montalbano is co-founding partner and managing director of Philadelphia-based Moto Designshop, which he started in 2004 as a development company.

He had been a licensed architect only since 2007 but had worked in architects’ offices from the age of 16.

“The house was very odd when they acquired it. Prior owners had done several renovations over the years, resulting in a very hodgepodge style including Colonial, semi-Mediterranean, woodland lodge and ‘80s and ‘90s [decor],” Montalbano said. A "before" photo of one of the bathrooms in the Gladwyne home owned by Jasmin Fung and Steve Lyons. Courtesy of Jasmin Fung The current main bathroom in the home. Alejandro A. Alvarez / Staff Photographer

But the home’s geography, overlooking beautiful land, made it a desirable location.

“They knew if the house could be renovated into a unified contemporary style, it would be an extraordinary property,” Montalbano said.

Montalbano started on the second floor, turning two bedrooms into one and taking out a walk-in closet.

“We opened up the space to let in more natural light,” he said.

This allowed for a larger contemporary bathroom, but the showpiece was the view of the garden, now visible through larger windows. The landscaping, stretching west out to the property line, was by Studio Bryan Hanes and Donald Pell Gardens.

He started with trees already along the stream and pond, including sugar maple, river birches and a magnolia, and added sage and purple moor grass, and wide variety of perennials including geranium and aster for year-round display.

Montalbano said it was a challenge getting a 16-foot-long window installed to give a panoramic view: “Steel beams and columns had to be carefully installed to support the roof framing above.”

The expanded bathroom was combined with a closet and presented its own challenges, including putting in a 13-foot-high cathedral ceiling. The glass-enclosed shower was placed in the center of the bathroom. The move was unorthodox but paid off in terms of roominess and natural light.

The first floor presented the biggest design challenge, Montalbano said, which included eliminating almost all load-bearing walls to create a floor plan that was open and flooded with natural light. Montalbano and his crew accomplished this by installing new steel beams and columns, an exercise in precision. They had to complete this new structural work cautiously so as not to disturb the finished rooms on the second floor.

“A final design challenge was to [build] the main staircase, which is actually hung from the second floor with steel rods that act as a structural support,” Montalbano said. “The individual stair treads are wrapped in mesquite hardwood, the same as the home’s flooring, to unify them as a connecting element of the design.” The whole project, the longest of Montalbano’s career, was divided into six phases:

Renovating a free-standing building on the property to be used as a shed, office, and gym space

In the process, the home was converted from five bedrooms to four, and the formal dining room was eliminated. The family occupied the house for all but six months, when they rented an apartment in Center City.

There are a few touches yet to come, says Fung. More lighting on the driveway, perhaps changes to the front door.

But with the couple in their 40s, this part of their life is pretty much done.

“It felt good, but kind of sad,” Fung said. “We used to joke that we wouldn’t know what to do with ourselves. We had spent most of our married life renovating the house.”

Have you solved a decorating, remodeling, or renovation challenge in your home? Tell us your story by email (and send a few digital photographs) to [email protected] "We had spent most of our married life renovating the house,” said Jasmin Fung, here with her husband, Steve Lyons (left), and architect Adam Montalbano. Alejandro A. Alvarez / Staff Photographer